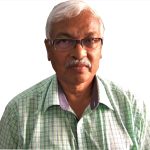 An MBBS (Bachelor of Medicine) from Calcutta University in 1978 he had completed his post graduate course on Tropical Medicine and Health (DTM&H) from STM, Calcutta, India between 1981 and 1982.

Dr Jana was a Field Epidemiologist in Dept. of Epidemiology, All India Institute of Hygiene and Public Health (AIIHPH), Calcutta before he became the Project Director of STD/HIV Intervention Program in Sonagachi, Kolkata in 1992.  The association changed his life and the destiny of the sex workers of West Bengal who were caught in poverty and violence besides putting up with extortion, coercion and sexual diseases.

1996 – 1998: Member of the Advisory board of the European Commissions’ program on AIDS & STDs in India

1998 – 1999: Member of the Technical Committee of FHI India to help assess & estimate size of at risk population in Maharashtra, India to initiate USAID supported intervention program

2004 – 2005: Member of the technical subcommittee of the Planning Commission of India dealing with Primary health care program

2004 – 2005: Member, Technical subcommittee of communicable and non-communicable diseases, for the 11th the five year plan, Govt. of India

2005 – 2007: Executive member of the UN regional partnership forum on sex work, based in UNFPA office in Bangkok.

2005 – current: Member of the National AIDS council [Govt. of India], the highest policy making body chaired by the Prime minister of India.

2011 – current: Member of the Supreme Court constituted commission to look into issues of Trafficking, Rehabilitation program, and to protect rights dignity of sex workers who are willing to continue in the sex trade

Dr. Jana fought for the dignity of sex workers in India that started from the red light districts of Kolkata in the early 1990s and then covered all the districts of West Bengal. He was responsible for collectivization of the women caught between poverty, sex trade and the scourge of HIV/AIDS. The demand Sex Work is Work first an all comes out from the soil of Kolkata by the tireless efforts of Dr Jana.

Dr. Jana’s brainchild, Durbar Mahila Samanwaya Committee, a forum of thousands of sex workers and their children in West Bengal, who fought for the workers’ rights of the sex workers of West Bengal and India besides their sexual health and social dignity. He was an advocate of decriminalising / legalising sex work and had most part of his career functioned from Kolkata. He acted like a father figure of the women who live in the brothels of West Bengal and other parts of India.

His main objectives were:

His innovative and creative approaches:

Dr. Jana was in the middle of foundations of several community based organization namely Durbar Mahila Samanwaya Committee of the sex workers and  Durbar Disha Mahila Griha Sramik Samanwaya Committee an organization of the Domestic Workers in West Bengal as well as collectivizing the ‘Shabars’, a tribal group of Midnapore, ‘Nachnis’, socially outcast women entertainment workers, as well as the Women Construction Workers of West Bengal, Usha Multipurpose cooperative Society, which empowers sex workers financially. Dr. Jana as an individual succeeded in conceptualizing and strategizing ‘Community Mobilization’ and ‘Ownership Building’ including its translation and practices what become an integral element of HIV intervention & Health Development in the country. This strategy has led the community to create social and political space for themselves what essentially play the underlying factor in shaping and reshaping her life and occupation and her health outcome.

Dr. Jana developed and articulated a new programming concept coined as ‘Community Led Structural Intervention’ (CLSI) as a unique approach to health interventions. This is based on the three pillars i.e.,

Dr. Jana, as the Chair, took up the challenge of organizing a conference in Kolkata over a period of seven days, parallel to the XIX International AIDS Conference which was held at Washington DC as the US Govt impose restriction in giving visa to sex workers. Dr Jana’s unique contribution lies in articulating empowering strategies & concept followed by its translation. His rights based approach to health intervention model for the marginalized communities like sex workers, transgender, Domestic Workers proved not only effective and successful but also provide an answer for sustainable development for the most stigmatized, marginalized communities who otherwise are kept outside the domain of health development in our country.

Family of DMSC, USHA, AINSW, DDMGSS pay tribute to our father figure who lost his life due to Covid. Sir, your learning’s will always encourage us. We ensure you, we will achieve the goal which you showed us.